In conversation with Neil Patel 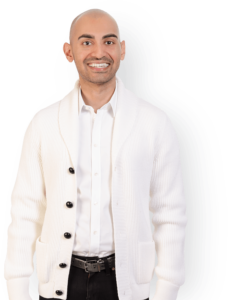 If you’ve been around online marketing longer than two minutes you’ve probably come across KISSmetrics, Crazy Egg or Hello Bar…

Well, Neil Patel founded (or co-founded) all of those…

The guy is a bona fide online marketing guru…

So would you be curious to know exactly what Neil would do with a thousand marketing bucks right now, to get the best return on investment? Yeah, me too… So I asked him – and, I have to say, his answer surprised me...

Neil Patel: I started my first website when I was 16. It was a job board, 'cause I couldn't find a job but I realized a job board's making good money so I created a job board. While I was doing that I realized that when I popped up a shitty replica of a job board that you don't instantly make money. You have to actually market your website to get people there. I didn't know that as a kid.

It's obvious now but I didn't know that as a child. I paid a few marketing firms, I got ripped off. Through my frustration from being broke, I had learned online marketing. I got good at it, once I started getting traffic and then I'm like, why not just get into the marketing space. That's how I started.

Rob Tyson: What age were you when you set up that job board? How long did you do that for before you thought, "Yes, online marketing is a thing I'm going to do?"

Rob Tyson: How old are you now by the way?

Rob Tyson: Okay, you're a young man, that's good. One question I do want to ask you, you obviously have vast experience and anyone who goes to your blog can see that, it's just great material there. What are some of the worst mistakes people tend to make with online marketing? What are the biggest errors, the biggest pitfalls?

Neil Patel: One of the biggest ones, I would say with online marketing is, they try to do just whatever they think that works based on competition, based on what they're reading versus testing the waters. Marketing is all about testing. You try a few different tactics, you see what works and then from there you keep adapting and pivoting. The key is to first test and figure out what works.

Rob Tyson: Okay. If someone is a business owner and this idea of marketing online is Greek to them, do you have any guidelines for them? How do they test stuff? Is this a case of getting familiar with Google Analytics or is it more simple than that?

Neil Patel: It's just reading, starting a work test blog and testing the waters on your own website. That's the quickest way to learn.

Rob Tyson: Okay. Right now we’re staring down the barrel of 2017. I just wondered what you feel are the biggest opportunities out there for online marketers in 2017?

Rob Tyson: How would we as website owners get started with that? Is there any software you recommend that could help us with that?

Neil Patel: No, a lot of it's all customized. That's a problem with personalization but it's well worth it.

Rob Tyson: If I was going to give you a 1000 bucks 'cause I'm a generous guy and I said, "Neil you have to spend this on online marketing next week,” what exactly would you do with it? Where would you spend it? What would be your objective? For example would you be trying to sell a product there and then, would you be looking to generate a lead? Talk us through your process. What would the steps in the process look like whereby you try to make money out of that $1000?

Neil Patel: For me it would be simple. I would focus purely on building a Facebook audience on my fan page. Because then I can keep going back to those people that I spent the $1000 on and then market products, services to them et cetera over time. I would build up a fan page.

Rob Tyson: Really? That's interesting. It doesn't worry you then because presumably to reach those people on the fan page you're going to have to, Facebook's almost becoming a pay to play ...

Neil Patel: Yeah, if your content is viral and your offer is good, they actually show it to a lot of people.

Rob Tyson: What does it take to create a piece of viral content?

Neil Patel: The way I look it is, it's really attractive headlines. That's one. If eight out of ten people will read your headline but only two out of ten will click through and read the rest of your article. I would say it starts with the headline, if your headline isn't too attractive then no one's going to want to actually read your content.

It's really big, most people take that for granted. The other one that I would actually consider in addition to headlines, is what could you end up creating content wise that's so thorough and in depth in your space that no one would ever dare to copy?

Brian Dean calls it the skyscraper technique. What we look at it as is creating something that's so thorough that no one would want to copy. For example if someone has amazing article in your space called, 21 ways to get rid of acne. I may do 101 home remedies that'll get rid of acne. Something so in depth with pictures, tons of contents, lot of words, very step to step actionable.

That's the kind of stuff that goes viral.

Rob Tyson: I suppose there'll be a lot of people listening to this and thinking, "Gee that sounds like an awful lot of work." I suppose that's the point.

Neil Patel: It really is the point. The stuff that is a lot of work tends to do the best.

Rob Tyson: Sure. Where do you look for inspiration for headlines? You hear the advice sometimes to pick up a tabloid newspaper or a National Enquirer and use those kind of headline formats. What advice do you have for people on improving headlines?

Neil Patel: The biggest advice I have on improving headlines is, for me it comes down to using curiosity, evoking it. The other thing is put adjectives in your headlines. Numbers and negative words increase click through rates. Odd numbers tend to perform better than even numbers. If you follow a few of those steps and techniques then you should be fine.

Rob Tyson: It's like ‘The seven things never to eat on an airplane’ or something?

Neil Patel: Yes. You got it.

Rob Tyson: What does a day in the life of Neil Patel look like these days? Are you still very hands on creating content? Or do you have other people who work on that for you?

Neil Patel: I do a lot of content creation. Most of my day is actually spent emails. Emails, marketing, phone calls, meetings, stuff like that to be quite frank.

Rob Tyson: Okay. How do you see things developing on a five year view, in online marketing? Where do you think the opportunities will be?

Neil Patel: I would say the opportunities are going to be more around personalization. The web is becoming so big, there's so many solutions out there, software sites, social networks. The ones that are personalized to individual user will start seeing more success. I really do believe everything is moving towards personalization. When you buy stuff, why shouldn't it just show you what you're going to like based on you, your friends, your habits, et cetera?

Rob Tyson: Yeah, sure. Will we reach a point with personalization where I get shown a different price for product X to you, on the basis that I'm prepared to pay more for it. Do you know what I mean? Do you see that situation happening?

Neil Patel: Hopefully not. I can see some people trying to do it but I think it will create more backlash then goodwill. Hopefully what will happen is people will only show you the products you want to buy so that way you're not wasting your time looking at stuff that doesn't interest you. Some people could use that kind of technology for bad purposes. I just hope it doesn't come that way.

Rob Tyson: One final question I'll ask before we wrap up today. I just wondered your views on email marketing. How important is it for you in your business, do you see it being superseded and if so in what kind of timeframe?

Neil Patel: Emails make up less than 10% of the traffic but they make up more than 40% of the revenue. I think it's one of the best channels out there.

Rob Tyson: Email has longevity, you think? People have been predicting the death of email for, well, we can go back to the year 2000 and find a lot of blog posts about ‘email is dead.’

Neil Patel: Yeah, I do believe there's longevity in it. I know people are saying email's dead but every company uses it for internal communication, I don't see that changing any time soon. Sure there's Slack and stuff like that, but it can't replace email.

Rob Tyson: Sure thing. Briefly I wanted to ask you about Twitter as well because I think that Twitter seems to be left behind a little bit by Facebook in recent years. I wonder what you think the future is for Twitter?

Neil Patel: I would say the future for Twitter is being acquired by someone else. I don't think it's the best channel out there because the users aren't as engaged. Here's the thing about Twitter, you take someone like Google with their ad platform and their advertisers, it can already make more money from Twitter's current user base.

How To Make Online Events Even BETTER Than In-Person Events, with Judy Rees
The Gentle Marketing Revolution, with Sarah Santacroce
Trump's Accidental Marketing Lesson For Us All
Close

Please take my FREE, 37 Point Sales Copy 'Acid Test' so you can fix your copy and boost your response

YES: Give me the FREE Sales Copy Acid Test
Close

Get The Sales Copy Acid Test

Plus ongoing tips and resources